Boating, Fishing, and Travel Information for Isle au Haut, ME

Isle au Haut, a large wooded island, 543 feet high, 4.2 miles southward of Deer Isle, is one of the principal landmarks of the locality. It has few year-round inhabitants, but a considerable number of summer residents. The coast is mostly foul and must be approached with caution. Part of the island is included in Acadia National Park.

Important Information from the Harbormaster: 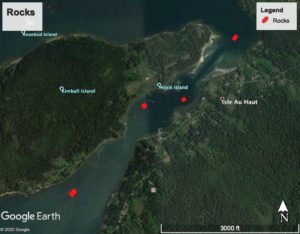 Isle au Haut, the village on the southeastern shore of Isle au Haut Thorofare, has a town wharf and float landing with 6 feet reported alongside. Gasoline, provisions, and some marine supplies can be obtained from the village store. Water can be procured from a nearby well.

Lookout is a village and summer resort at the eastern end of Isle au Haut Thorofare. A buoyed channel to the wharf from Merchant Row leads between Merchant and Hardwood Islands, northeastward of Bay Ledges, and westward of grassy Flake Island off the village. The wharf has a reported depth of 8 feet alongside. A buoy off the southwestern end of Flake Island marks the turn in the channel to the wharf. In 1965, dangerous rocks, covered at low water, were reported in the channel between Flake Island and Birch Point at the north end of Isle au Haut.

Isle au Haut Light (44°03’53″N., 68°39’05″W.), 48 feet above the water, is shown from a tower with its lower part conical, gray in color, and the upper part cylindrical, white in color, at Robinson Point on the south side of the western entrance. There is a white bridge to the shore. The light has a 034°-060° white sector that marks the approach to Isle au Haut Thorofare. A buoy and daybeacon are off the two principal dangers on the north side near the western entrance, and buoys mark both ends of the dredged channel.

Enter Isle au Haut Thorofare between Isle au Haut Light and Sawyer Ledge Buoy 1, and pass southward of Inner Ledge Daybeacon 3, giving it a berth of over 50 yards. Then keep in midchannel except in the choke at the entrance of the anchorage, where the northern side should be favored slightly. Avoid a rock, bare at low water, which is 90 yards from the northwest side of the anchorage.

Between Moxie Island and Isle au Haut Thorofare Daybeacon 4, the channel is narrowed by a ledge with a depth of only 2 to 4 feet. The ledge is so close to the charted 16-foot depth that boats either run on it unawares or come to anchor and are set aground by the falling tide. The daybeacon marks the southeast end of the ledge.

By Dave Cleaveland. Back in the 90’s I had a business that photographed golfers on several golf courses in the Myrtle Beach, South Carolina area. While they played, I would run to the photo lab (yes, it was actually film in those days), get the film processed, run back to the golf… END_OF_DOCUMENT_TOKEN_TO_BE_REPLACED

By takemefishing.org The best places for boating generally have a few important things in common. First, the best boating lakes offer you multiple ramps or access points. In other words, launching and docking your boat is super easy because you aren’t limited to a single ramp or marina. Second, there… END_OF_DOCUMENT_TOKEN_TO_BE_REPLACED

By www.discoverboating.com You may have recently discovered just how much fun freshwater fishing can be, or maybe some recent saltwater fishing excitement has got you hooked on the sport, but no matter how and where you fish there are some basic fishing tips for beginners that all anglers need to… END_OF_DOCUMENT_TOKEN_TO_BE_REPLACED

By fisheries.noaa.gov See how farming sea scallops in Maine is helping fishermen and coastal communities face new challenges and adapt. Fishermen lowers sea scallops into the water. Credit: NOAA Fisheries. Aquaculture of sea scallops in Maine has been steadily developing for about 20 years. This type of seafood farming offers… END_OF_DOCUMENT_TOKEN_TO_BE_REPLACED